I received your Apple AirTags and used them for the first couple of weeks that I had these. My first comment is I’m not a person who is heavily into computer functions, the problem for me was that this Apple product did not come with a simple set of instructions on their set up or use. The directions that were in the package were 3or 4 pamphlets that were incredibly small type. I found these almost impossible to read. I resorted to using my computer to photograph these pamphlets and use the computer to enlarge the image. I think that this could be resolved by using a larger type in the production of this information. I found the information contained didn’t give great directions on how to use them. So I went to the web and I looked up Apple AirPods to set them up. I found their shape Unique, I liked the feel and shape of this product but there was one problem, these devices have no way to attach them to any object you’re trying to locate. 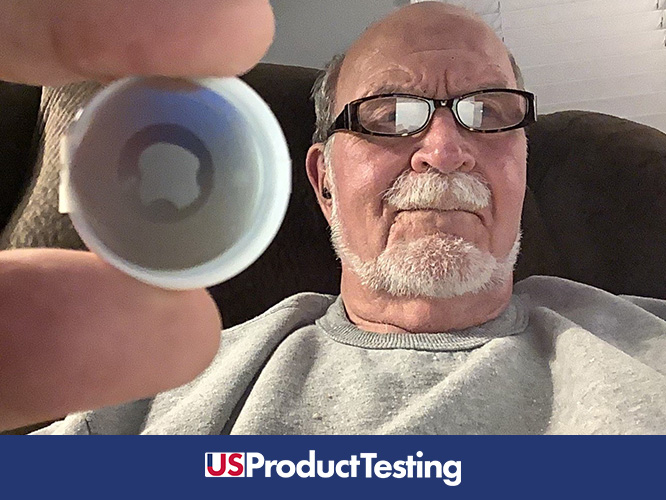 Brian Sutcliffe with his AirTag

The first thing I did was to take out my wallet and I placed one of the devices in the wallet and I found it was much too large. To be truly honest with you, a few years ago I bought a different type of tracker for my huge they were square. When I placed these devices into my wallet they were not causing the wallet to be uncomfortable due to the thickness of this device.  They were much thinner so they were not intrusive into the shape. One discovery was that these Apple pods do not come with any way to attach them to your devices. Upon investigation, there were advertisements on the purchase of accessories that could be used to attach these to keys, etc. I did not like this particular idea, it should be stated clearly that these do not come with any attachment devices. The cost of these accessories I don’t find to be a little pricey. I think you should let my customers know beforehand that there are no means of attachment and you purchase them to track objects such as keys, etc. As I used these devices as time went on I found them to be unique. I’ll give you a story of one of these pods that I had placed in an old wallet, And let me tell you a little story about what happened to this device, I received a new wallet with a patient as a Christmas present so I decided to use my new wallet but I did not take the Apple device from the old wallet. a few days later I decided to get rid of my old wallet forgetting that the pod was inside. A few days later I realized that the pod was missing I then proceeded to check where the wallet was, I realized I had disposed of the wallet into the trash. I was amazed at its ability to track where the wallet was. I discovered that the wallet was in a landfill many many miles away from my home, it gave me directions on how to get there. I found this to be amazing! I’m sure the treatment of the wallet was very extreme. I don’t think they handled it with care and to survive this treatment I find it incredible. My next comment on the Apple pods is the signalling device, One, I found the volume to be ludicrous low volume. I know I’m retired and aged in years, but I still have fairly good hearing. I found that you have to be very very close to these devices to hear them. I think I’m not alone in this criticism. So if you want to find it because if this very soft signal you must be very close to the object, if possible I would suggest that if there is a way, to make the volume of this signal a little louder to locate the object from a longer distance. My next observation was that when you triggered the signal it did not last for more than a few seconds. I had to keep going back to my computer to redo this signal. I think it would be much better if you made the signal last longer than a few seconds so you would not have to keep restarting the device's tone. In conclusion, I have to tell you that  I grew to like the Apple pods more and more as the tie went on. I thought they were unique, although not perfect, they truly served a  purpose in finding any tagged lost devices. Apple does have competition in this area and the style the feeling of these apple devices are far superior to other tracking devices that are on the market. I like the design and tactile feel of these products. I found that they work very well, keeping in mind my two or three small criticisms about their function,  I think it’s a great device. I think you for your allowing me to test your product, and  I hope you receive important information about the functioning of these Apple products. I’m wishing all of you a happy New  Year.