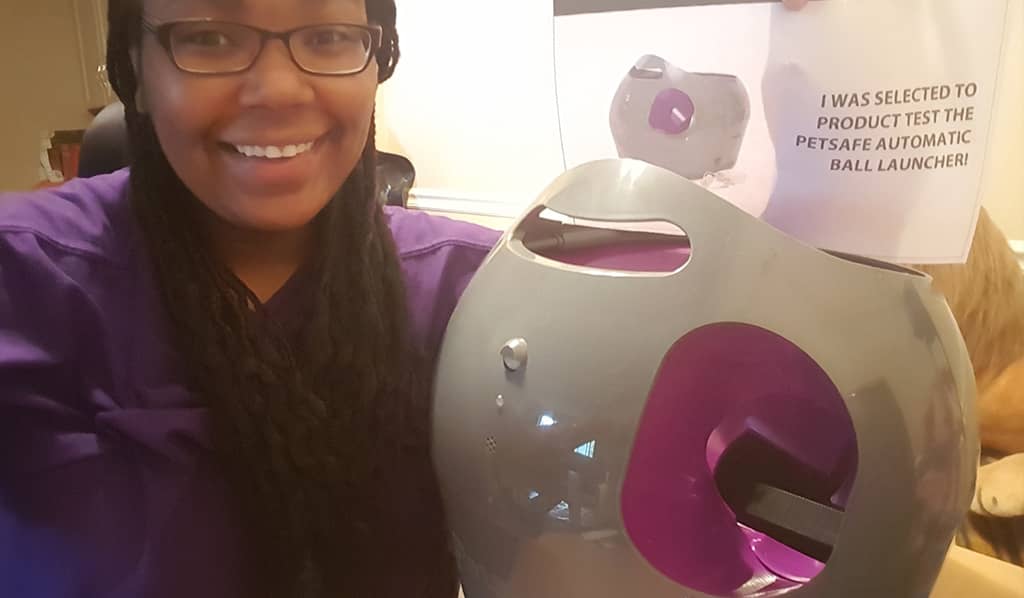 Caprice was chosen to be our Petsafe Automatic Ball Launcher reviewer.

I am so excited to be reviewing this Automatic Ball Launcher. For starters, delivery was amazing. Two days after I got alerted me of my win, I received the item in the mail. That was super quick! It came in a huge box, but was also secured inside due to packing bags, and the shipping box and product box itself had no damage. Onto the product itself, it is purple and grey, with green knobs on the sides. In my opinion, gray and purple can usually be boring colors, but they stand out on this ball launcher. It looks very attractive! It has a “sleek” design, as it is not very heavy at all and also has a place to slip your hand into to carry it. It seems very sturdy.

This ball launcher can run off of 6 D batteries or a power cord, which is included. The batteries are useful when you want to use it outside and move around to various places with no outlets, and the power cord is great to transport it around the house and avoid changing out batteries. The ball launcher was extremely easy to set up. Right out of the box, I plugged it in and inserted one of the included tennis balls. It came with two, and if I want to buy more, it just takes standard tennis balls. I turned the unit on, which it has a small on/off button, and it beeped. I read through the manual which stated what the beeps meant. After placing the ball inside, the beeps peaked my dogs interest. He watched from afar and out shot a ball! He was so excited! We tried it a few more times and he loved chasing the balls around the house. It will take him so time to learn to place the ball back in himself, however. 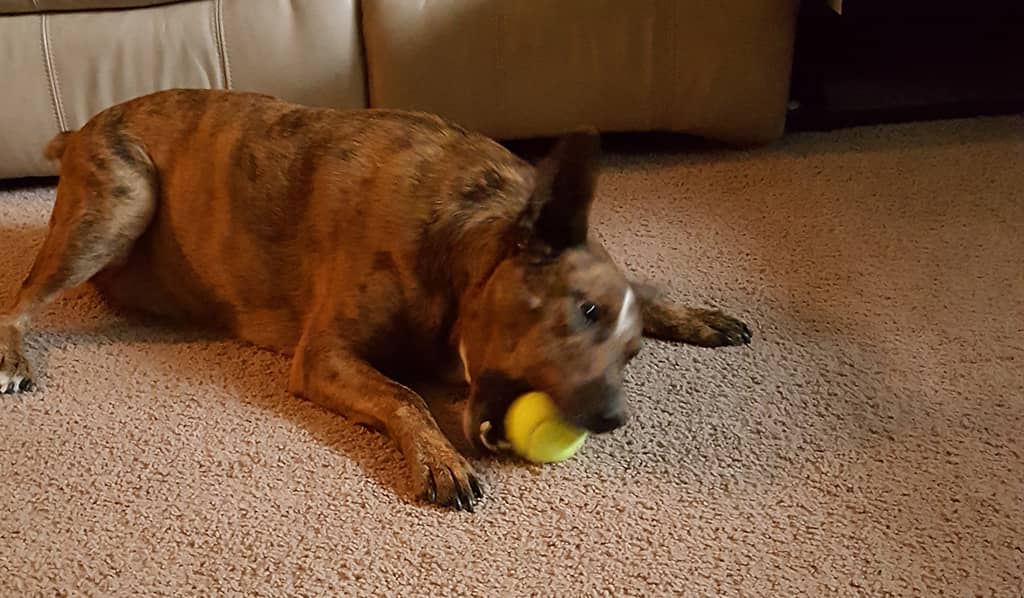 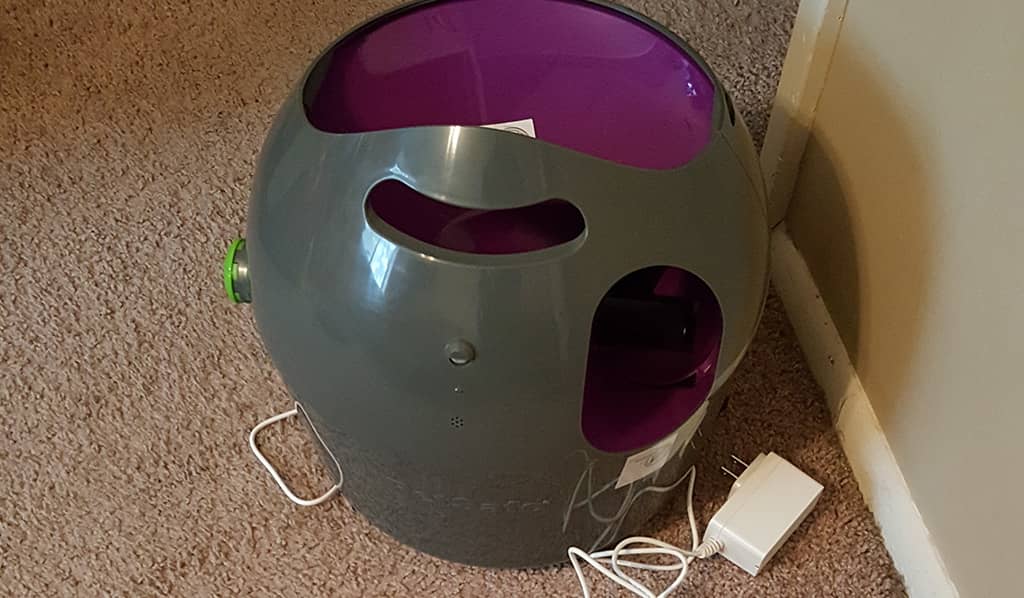 I think the size of this unit is wonderful. It is easy to see and easy to place the tennis balls inside. It is not super difficult to set up, either. It is not super huge by any means, but it can definitely take up a bit of space. I plan on storing it in a corner of my living room. It is roughly the size of a large flower pot. The specs I was most interested in of this product was its ability to change the distance and the angle. The distance can be set so the balls fly from 8 feet to 30 feet, and the angles can be set from 20 degrees to 45 degrees. This gives plenty of dogs’ opportunities to play with this item, as it can be adjusted accordingly. Another great spec is the motion sensor on the front of the item. The sensor detects movement in front of the launcher and will hold off on launching balls, so that no one gets hit (human or dog) if they are walking in front. Standing a good seven feet away or off to the side will not set off the motion detector. If you have a dog who likes to be in the face of things, this product may take some getting used to as it will not work unless he or she are far away.

This ball launcher also has a timer. It will only work for 15 minutes a time, and another 15 minutes in “rest” or standby mode. Basically your dog can play with it 30 minutes out of an hour. This purpose is for the dog to rest and not get overworked, according to the product’s creator. I think it’s a nice idea, but can be annoying to some others. The ball launcher was what I expected. I honestly did not expect it to launch the tennis balls at fast as it did, and having the options to control how far/high the balls launch is awesome, too. You can adjust it for your dog’s needs accordingly. I do think the ball launcher is quite expensive compared to others, but I do think it is worth it. It is a fun enjoyment for your dog and very stimulating, and you can’t put a price on a pup’s enjoyment. The only thing that bothers me is the timer, as my dog can definitely play longer and chase balls for more than 15 minutes but it is the thought that counts.

I would definitely recommend this to a friend or anyone who has always wanted to try an automatic ball launcher. It is so much fun to watch my dog play with it, and it is fun for me as well, as it can be entertaining to watch. On a scale of 1-5, I rate the ball launcher a 4 simply because of the rest mode (I wish it was optional) and also because there is no place to stack the balls inside. I would love to be able to place a bunch inside so they shoot off one by one, rather than loading one at a time.