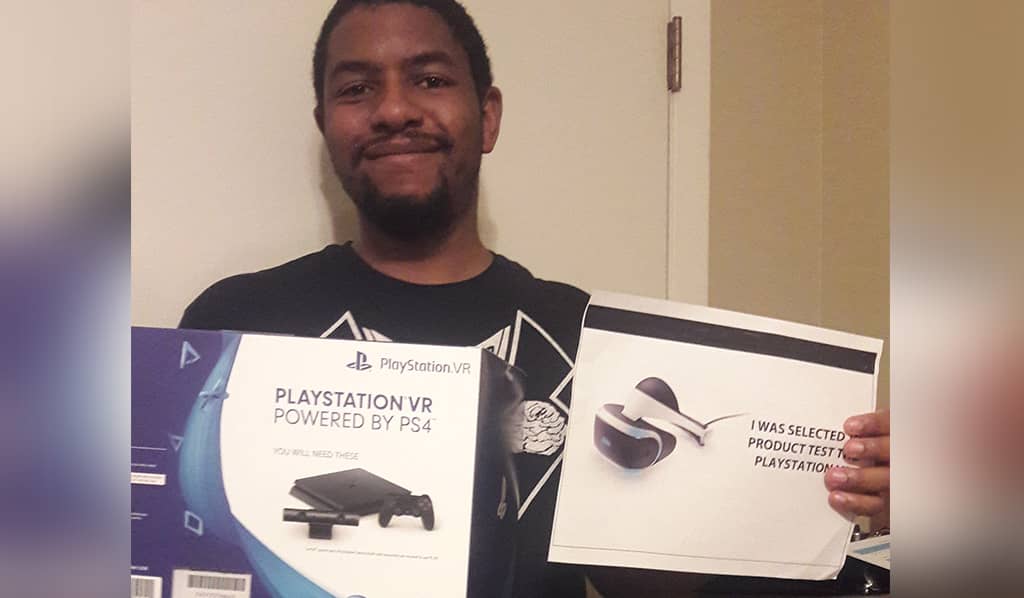 De'Von has written a brilliant review on the Playstation VR, have a read and see if you think its worth the money!

I was so excited to review the PlayStation VR headset, and I hooked it up the moment I got it. I found out Thursday morning that I had been selected, I confirmed my address and it arrived with my regular mail on Saturday afternoon, so the shipping is just like my Prime two day shipping. The PlayStation VR headset came in a tightly packed box that prevented the PSVR box from moving around and being broken while being shipped. The box was taped securely as was the PlayStation box that the VR headset was actually in. Everything in the PlayStation box had its own compartment separated by cardboard dividers, making it very easy to know if you had all of the attachments. The one thing that surprised me was how many things were required to set it up. There is a power cord, an extra HDMI cord, a box that you hook the everything too and the headset. It also came with headphones for the VR experience, but I suggest having your own. I have a pair of over-the-ear headphones and they did not fit weird or crammed on my head with the VR headset on. They actually fit better than I expected they would. Your headphones, if they have a cord instead of bluetooth, get plugged into a small white device that is on the cord that goes from the VR headset to the small box that plugs into your PlayStation. The headset is very easy to use and setup, (the instructions give you step by step pictures and all of the cords are numbered so you know which step is first versus last).

Enough about the setup though, let's get to the good stuff! The headset is sleek, and incredibly comfortable. The cushion that is applied to your face is similar to the rubber that covers the hole of your garbage disposal. In contorts to your face and holds the headset securely. There is also a dial that you turn when you have the headset on in order to tighten the headset band that goes around the back of your head. I have played a couple different games so far (Until Dawn, VR Worlds and the demo disk). I will not talk about the games themselves, but I will say the headset is extremely responsive. It detects ever slight tilt and every turn of your head. I have played it for about 2 hours total, and I have not once had it not respond. The graphics as a whole seem to depend on the game rather than the headset. For instance, on VR Worlds there is a game called Ocean Descent where you are in a metal cage going deep into the ocean. The graphics for that game were incredible and the detail of your surroundings was so realistic. For a game like Until Dawn however, it seemed a bit grainy when things came close to your face. I am sure as more games come out and get better, the quality will increase, but the headset itself is solid! The move controllers are also very responsive, and you can actually see your character’s hands when you look down to where the move controllers are supposed to be! 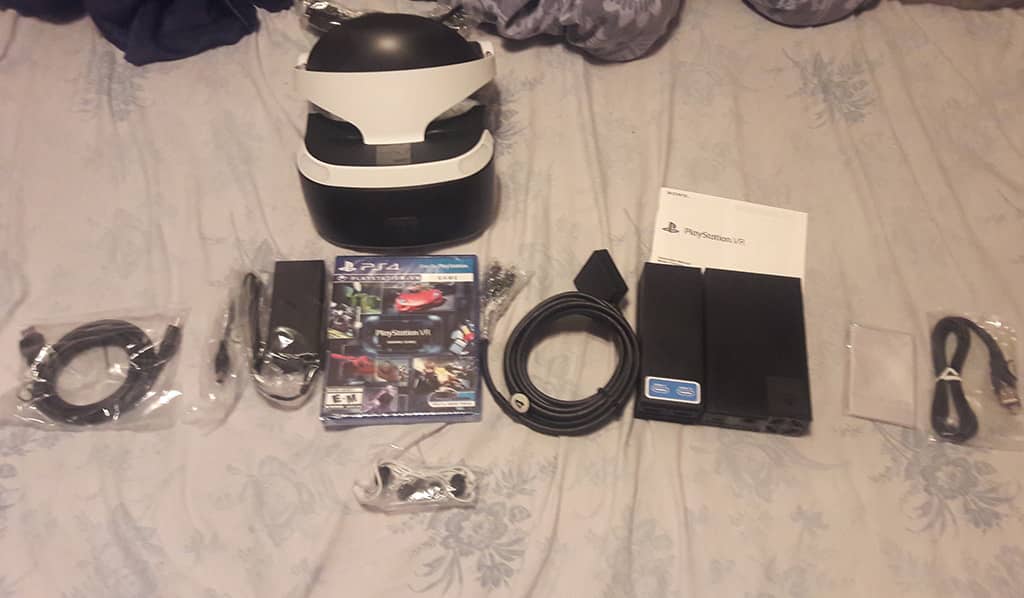 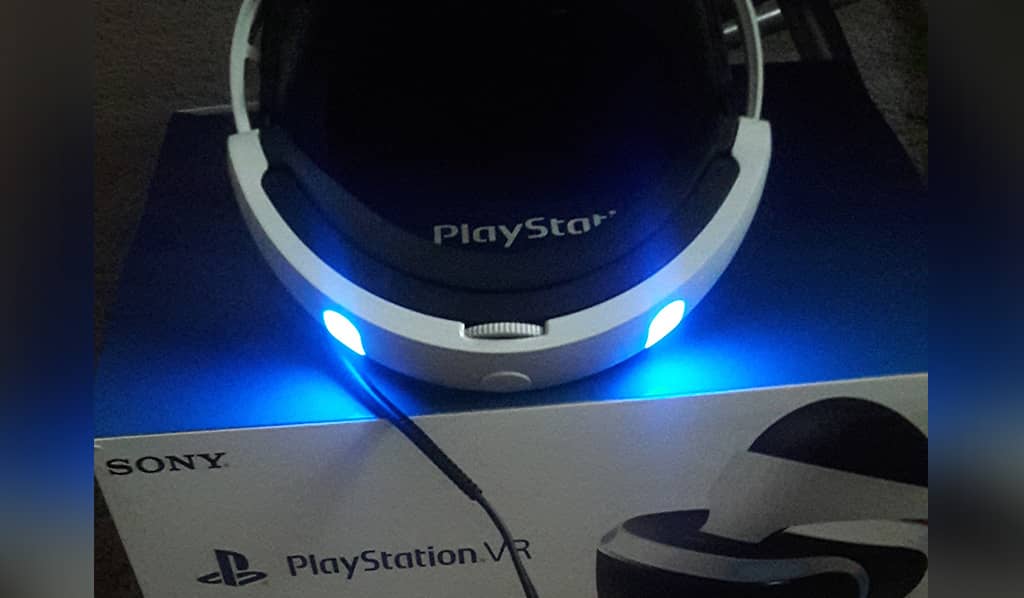 The one critique I have about the controllers, and this might have just been VR Worlds, but it required me to have my dual shock controller turned on even when I was using the move controller. If I turned it off, it would pause the game and tell me to reconnect it. It is not a big deal to me, but it did seem kind of weird. The dual shock was also able to be used in order to point at certain things, but I haven't actually had to use it in a game. I have tried cinematic mode with non VR games; it is like playing 2 or 3 feet away from a TV. The surrounding area is just black so when you look around you won't see anything else unless you are looking at the screen. That could come in handy if you are playing late at night, or in a room where someone else is sleeping. With the VR headset, I turned off the TV and I was able to play it silently, because all of the in game audio comes through the headphones.

After playing with the headset, I went back to the Tech Specifications that are listed online, in hopes that someone who looks at these will read this review. All of the specifications are correct and not embellished in any way. It seems to have a high refresh rate and panel resolution is incredible. The panel size is also correct, but one thing I wanted to correct is the field of view misconception that some people have. Currently it is reported to have 100 degrees. For all of you who are not exactly tech savvy, that does not mean that you can only look in front of you and there will be nothing behind you. What the 100 degrees means is that if you look in one direction, from the left side to the right, that is 100 degrees. So there is still 360 degrees of content that surrounds you, but you can only see 100 at a time. I hope that makes sense. If not, you will see what I mean when you play it or watch gameplay on youtube.

The audio and video are also amazing! In VR Worlds, you have a scene on one of the games where you hold a cell phone to your ear. You can switch ears and it will only come out of which ever side the phone is on. I have tried using the party function and had no problem with the in game audio and the party audio. If I did have a problem, I would just simply need to adjust it in my PlayStation settings. The video is crisp, and it is never blurry, unless your lens is smudged. I have perfect vision, and I had no problems (with my eyes) taking off the headset and switching to my laptop to type this review. The headset is easy on the eyes, and it says it has room for people with glasses, but I will have to test that on someone with glasses. The 3D experience is also really authentic. In Until Dawn, you ride a rollercoaster and when the drops came, I legitimately got that feeling in my stomach when I ride a real rollercoaster. It was not intense as a real rollercoaster, but it definitely gets the stomach fluttering.

All in all, I would rate this headset 5 out of 5 and I already have friends who are eager to give it a shot. If you have the money to buy this, I think you should because this is going to be the future of video games and the resurgence of the move controllers. I originally bought my controllers back when the PS3 came out and have not touched them in years. But when I fired them up for the VR, they worked as well as they did back when I first got them. The new camera is compact and is very efficient at tracking. Also one thing I noticed is that I calibrated it the first time, and then turned off the headset, and then came back a few hours later and it did not have me recalibrate it. So if you are having trouble calibrating your headset when you first get it, do not worry, you will only have to do it once!