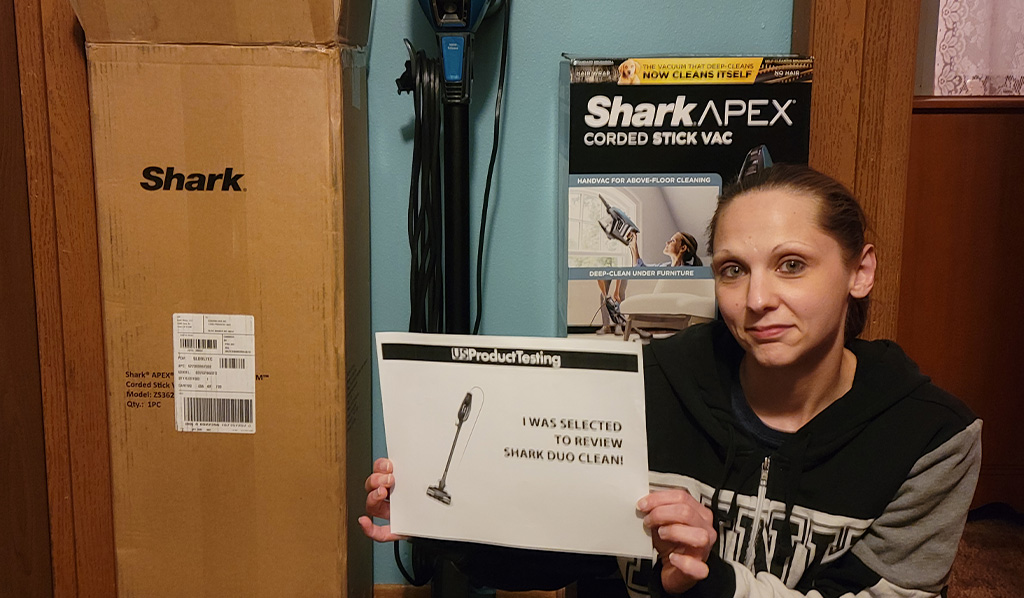 Michelle it turned out was the perfect person to test out the latest vacuum from Shark as she had been trying a whole bunch of vacuums recently, read on to find out why and what she thought about the Shark Duo Clean

What a long crazy journey I have been on for the past few months! I'm a bit of a neat and organized person… Ok, a lot!

As I was vacuuming my home on the daily basis that I did it, I noticed I was vacuuming up what sounded like crumbs or bits of sand in some places. Slowly this stuff got worse and worse, and in every single room of the house! Not including the full finished basement, which in fact does have carpeting. Although it is a higher traffic, smooth kind of carpeting. The master bedroom (mine and my significant other's room) was the very worst with having such weird sandy, gritty stuff coming up every time I would vacuum, so every day!

I noticed it was worse underneath of furniture such as recliners, beds, and dining room table among others! I spent my weekends vacuuming for hours, especially in that bedroom. It did no good, I just couldn't get it all and I didn't know what to do! My boyfriend of 20 years was starting to think I was very seriously going off the deep end and just plain crazy. He even tried to help me and spent an entire weekend steam cleaning, only for it to be worse after drying! told all my friends about this stuff, a few even brought their own vacuuming cleaners just to see what exactly I was talking about!  Most of them thought just the same, poor Michelle, what is wrong with her and why is she acting so nutty over this vacuuming thing in her house!? I spent many, many nights researching what this could be and why! I had several leads that made sense. I was 90% certain this stuff in my carpets was coming through my heating and air conditioning vents. That made sense with how it was in every room. It got so bad that as I would spend hours trying to get as much as I could out of these carpets, they would just be either the same or worse the following day.

How frustrating this feeling was, I could not keep on trying to get them cleaned, it was just impossible to do! I borrowed most if my friends vacuum cleaners, trying out different brands and kinds to try to see if maybe that would help. I tried everything possible, even big expensive and very loud shop vacs. I learned by taking the hose and placing it directly into my carpeting, just to prove I was not crazy at all in fact! It was a constant struggle between this battle with my carpeting, everyone around me thinking I'm nuts, and trying to figure out any kind of answers. Now, wouldn't you know it, the one person I did not tell or even think to tell (because I told everyone) would be exactly where the correct answer would lie.

My lifelong friend who came to visit me often even!  I'm not recollecting the moment I told him or spoke about it, I had also forgotten that he went to college to become an HVAC technician several years back. Unfortunately, that did not work out for my dear friend who now has a mild brain injury due to a fall that brought him very close to leaving this earth.  After remembering he had gone through schooling for that subject, I believe I ran down to the laundry room with him following, to where the furnace is located. He knew right away, a crack in the heat exchanger inside of the furnace he called it. My boyfriend called on his lunch break and as I was telling him what my friend had said it was, he mentioned that same thing had happened decades ago in this house where his grandmother once lived. This was an entirely different furnace of course. My HVAC graduated but not working his dream job, has a best buddy who also went through college with him and IS in fact working his dream job, 2 blocks down the street from my boyfriend's place of employment. I called and booked someone to come take a look, mere days later my service technician was in fact my friends' best buddy whom he had went to college with. He confirmed it, a crack in the heat exchanger. Unbeknownst to me, I was not aware of how incredibly expensive this part of a furnace was, and that it would actually be a wiser decision to replace the entire furnace itself. A crack in the heat exchanger has the ability to leak carbon monoxide, among other dangers as well! We do have 2 of those detectors, one upstairs and down. They never went off and were tested on a regular basis, thanks in part to my 4 year old who just loves to hear the beeping sound and knows exactly which button to push.

Upon learning of this major expense, I remembered a program that had offered a free furnace if something like this had happened or was damaged beyond repair, in the winter months like we were facing, it was even more dire. Contacting them got things moving extremely fast, we had a new furnace installed within days. This crack in the heat exchanger is obviously what had caused all of the debris that I was going crazy over trying to vacuum up, and it was in fact coming through our ventilation system. I had previously contacted our homeowner’s insurance company months before to inquire about if they covered anything to do with carpeting. They did not. Now finding out what exactly was the cause of this in the entire upstairs, I had some hope that they would be able to do something. I was correct, a claim was filed and took about 2 weeks of investigating it, taking a massive amount of videos and photos, ect. Our next step is to purchase our new carpeting!

In between all of that craziness, I sometimes enjoy taking the occasional survey now and again online. Now after ALL of the different vacuums I had borrowed and went through, I had come to the conclusion that the brand Shark was the best at picking this stuff up out of my carpeting. I saw a headline to try for a product test on a really nice Shark vacuum. Of course, I immediately began and completed the survey. I didn't think much about it afterwards, I was too busy vacuuming still! Then one day I received an email from the website who I had applied for testing that Shark vacuum. This email was for signing up to test another product but upon scrolling down there was a headline and link to viewing the chosen winner who would be testing the Shark. I of course had to click on it and wouldn't you believe it, there sat my name at the top saying I was chosen. My initial thought was that this was some kind of joke!  After going through the validation process and a couple emails back and forth to the company, I now have this Shark vacuum in my home. It has been a lifesaver while I have been waiting for my new carpeting to be installed! A complete and unbelievable (almost) ending to this very long and frustrating journey I have been living. I know a thing or two about vacuums after all of this nonsense and this is yet by far the best one I have tried! It will no way make these carpets of mine all better and debris/sand free, but it does pick up a lot more than any other machine I have used. Every single machine was more spreading this stuff around than anything I noticed, but not this one! The dual brushes leave nothing behind and nothing to be spread throughout while vacuuming up very small bits of dirt and sand that have wrecked my carpeting from the inside out. I hope the creators of this machine know just how well it is built! Most definitely worth every penny, this will be the last vacuum you will ever buy!

To sum up this device, the performance is top notch! The delivery was fast and only took a few days, without any damage to the packaging! Very easy to use and push around, I always struggled with the heavy vacuums!  It looks good, everything on it screams Shark quality, even the size is great! Going from carpeting to bare floor such as my kitchen, is easy with switching over by the push of a button. I wasn't sure how the bin dirt trap would be since it is on the smaller side but it holds a lot of this sandy stuff I've been dealing with lately! Of course my dog doesn't help with adding tufts of hair on top but that just means it's picking up everything! Low on noise with both carpeting and bare floor, minus the sand getting sucked up of course! This Shark Duo does not run on batteries, but the cord is extra, extra long! Longer than any other vacuum I have had before! I would and did recommend this machine to several friends and even family! Now they are all jealous of my having the opportunity to product test this unbeatable device and brand! My previous vacuum (s) to compare? Which one?! I've went right through several! This one stands the test of time and I will definitely give it a 5+ star rating! Thank you Shark Duo!